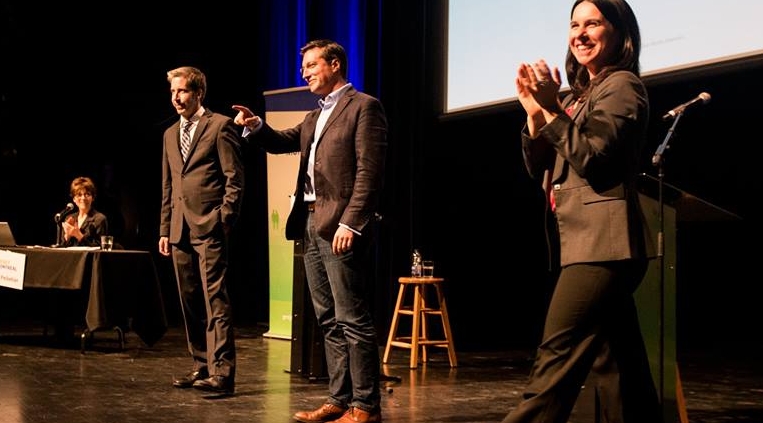 There’s an unfortunate irony with city politics. It’s the level of government that is closest to us, and where our councillors are only a Facebook message or borough council meeting away. It’s at the local level where common values are most cohesive, experiments in participatory democracy are most practicable, and the impact of decisions on our physical environments are most tangible and immediate. Yet it is also the level of politics that excites people the least, with abysmally low voter turnout rates that barely manage to scrape past a feeble 40 per cent.

I’ve thought a lot about the reasons for this, and it seems there’s enough blame to go around. There are the politicians who speak of city government in dry managerial language as an “administration,” and whose ambition is limited to building a “ville intelligente,” propelled by the wide-eyed dream of an efficient snow plow operation. There are the opportunists who pretend local politics exist in a values-free vacuum, where notions of left and right — shorthands for philosophical divergences between collectivism and individualism, equality and elitism — have magically ceased to apply.

As if sound management and du “gros bon sens” could replace the need for vibrant debates over the principles on which our city should be built.

And there is the local media, who often fail to discuss city politics at all, or serve as a megaphone for “taxpayer” anger over corruption, potholes, and orange cones. Because if the municipal machine is nothing more than a dispenser of services, then citizens are merely the ATMs.

Corruption matters, and so does efficient management. But to hear the way we talk about cities, you would never know that they are on the front lines of combatting climate change, integrating immigrants, reducing inequalities, or developing new forms of democratic decision-making. You would never know that they are home to over half the world’s population, or that they produce around 75 per cent of the world’s GDP and greenhouse gas emissions. And you would never get the slightest hint that while our 19th-century nation-states remain bogged down by divisions and dated structures, globalized cities are increasingly networking amongst themselves to devise innovative solutions to this century’s most pressing problems.

For a glimpse at the revolutionary potential of urban policies, you’d have to look elsewhere. In Barcelona, the city’s left-wing government is pursuing a bold new strategy to reclaim 60 per cent of its streets currently used by cars to serve as “citizen spaces,” green neighbourhoods where “expression and participation, culture and knowledge,” and “the right to leisure” will slowly replace the roars of car horns and engines. Cities from Madrid to Oslo have announced similar plans to pedestrianize their city centres within five years. And Copenhagen, which has become the world’s cycling mecca after decades of avant-gardist policies, has pledged to go completely carbon neutral by 2025.

Building a modern movement for Montreal

Meanwhile in Montreal, our mayor is waging a war on pit bulls.

Fortunately, we have an opposition party that dreams a little bigger.

For twelve years, Projet Montréal has stoked the local imagination with grandiose visions of what a human-scaled city of the 21st century can be. Under party founder and former leader Richard Bergeron, the party did much to popularize new urban thinking in Montreal, persistently raising the bar by proposing audacious transit and urban planning projects inspired by cities around the world. Where it did less well, however, was in connecting with Montrealers’ daily concerns, broadening its base beyond the environmentalist left, and rallying Montreal’s progressive social, political and economic forces under its banner. Few Montrealers came to associate Bergeron’s Projet Montréal with causes of social justice or participatory democracy, despite the party’s founding principles that placed these on an equal footing with sustainable development.

The party’s current leadership race is an opportunity to change that, and to help build a new urban movement in Montreal that can propel the next generation of leaders into power in 2017. This is the first leadership race of any political party in over 20 years in Montreal, and it is most likely the only chance Montrealers will get to have their say in who will go up against Mayor Denis Coderre in next year’s election.

The choice of mayoral candidate will have a major impact, both on the direction of the party and on its capacity to unite the opposition forces and topple Coderre.

There is Valérie Plante, a downtown city councillor with a long history of community involvement, who has placed the need to combat social inequalities at the heart of her campaign. A member of the Broadbent Institute’s board of directors, Plante has vowed to push for a $15 per hour minimum wage, to expand social and affordable housing, to appoint a gender-equal executive committee, and to combat systemic discrimination against women and racialized minorities. She has called for Montreal to become more proactive in opposing the Energy East pipeline and reducing its greenhouse gas emissions. And she has made citizen engagement a central part of her appeal, promising to usher in a new culture of collaboration at City Hall as Montreal’s first woman mayor.

There is Guillaume Lavoie, the party’s finance critic and an international expert in public policy, who has made the “collaborative and sharing economy” the central focus of his campaign. Promising to expand car-sharing and to “regulate so as to better permit” services like Uber and Airbnb, Lavoie views these platforms as the pillars of a new economic model that carries the potential to reduce waste, expand access, and boost productivity by utilizing dormant resources and promoting a “nation of micro-entrepreneurs.”. Considered by many to be the most centrist candidate of the three, Lavoie has vowed to broaden the party’s appeal by reaching out to those who have remained outside Projet Montréal’s traditional base of support.

And there is François Limoges (right), a city councillor from Rosemont, whose signature proposal of a “10/45” plan would ensure that all Montrealers can access public transit within a 10-minute walk from their house and arrive at their destination within 45 minutes. Limoges also wants to expand the network of ruelles vertes into a massive grid that would span the entire city and become an emblem of Montreal, and he’s promised to create three to five new public markets in underserved areas of the island that would rival Jean Talon and Atwater.

There are many areas of course where the candidates are in wild agreement. But beneath the surface, there are also significant divergences, both in philosophy and style, and in particular between the two presumed frontrunners, Valérie Plante and Guillaume Lavoie. That, after all, is what leadership races are for.

Yet whichever candidate one prefers, it is hard to deny that there is an abundance of substance between them, and that there are three visions that all see further than our current mayor’s fixation with pit bulls and potholes.

This article was originally published on Ricochet.

Want to join the discussion?
Feel free to contribute!

The NDP can Leap into relevance